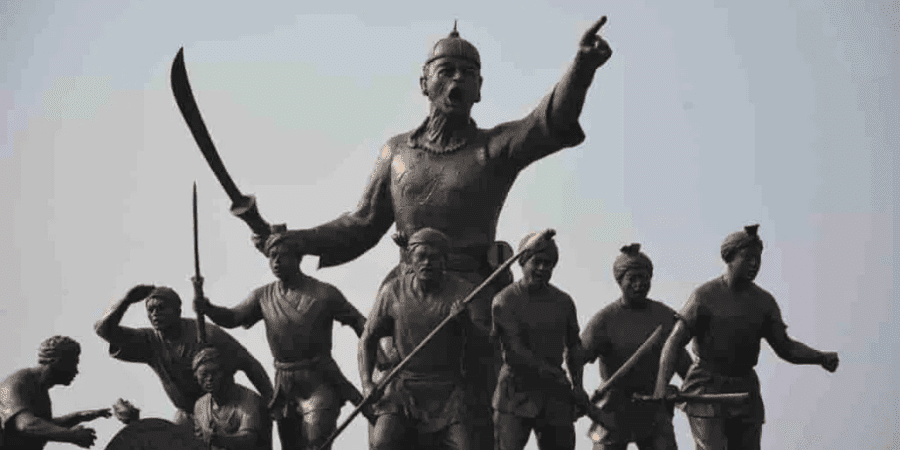 Photo by Sandip Roy on Unsplash

This article gives a brief summary and additional/extra questions and answers of the chapter "Indian Freedom Movement and National Awakening in Assam" which is the fourth chapter of the History textbook of Class 10 under the Board of Secondary Education, Assam (SEBA). The facts mentioned in this article are in accordance with the textbook.

The Yandaboo Treaty was signed on February 24, 1826, after the ejection of the Burmese troops from Assam which led to the East India Company's annexation of Assam. India came under the direct rule of the British Crown after the failed Sepoy Mutiny in 1857. The period between the two events is known as Company Raj in Assam.

The capture of Assam by the British ended in economic and political restructuring and the initiation of English education had a twofold impact on society. While on one hand, it helped the educated indigenous class to critically examine tradition, on the other hand, it facilitated the growth of national awareness and national awakening in Assam. By the end of the 19th century, the voice of dissent started stirring the people of Assam. Several socio-cultural organisations were formed highlighting the issues and dreams of common people.

The Assam Association had been participating in national politics under the leadership of Congress. While many of its leaders felt that the Association should identify itself with Congress, there are also some who refused to amalgamate with Congress. Nevertheless, Congress started to immensely attract the middle class in Assam. As a result, at a meeting at Jorhat on April 18, 1921, at the initiative of leaders like ChobilaI Upadhyay, Nabin Chandra Bordoloi, Krishna Kanta Bhattacharya, the Association took the decision to merge with the newly formed Assam Provincial Congress Committee affiliated to the Indian National Congress.

The influence of the Swadeshi Movement in Assam was seen mainly in Dhubri, Gauripur, Goalpara, Guwahati, Tezpur, Dibrugarh etc. People like Ambikagiri Raychoudhury along with others formed a revolutionary organization among the students of Guwahati. They even took initiatives in the form of welfare activities for the success of the movement. Some of these activities were:

i. Introduction of Assamese language and literature in the syllabus of entrance examination of Calcutta (Kolkata) University.
ii. Introducing bachelors degrees in all departments of Cotton College.
iii. Reintroducing Moujadary system in the Brahmaputra Valley.
iv. Introducing 20 point settlement of land.

The Non-cooperation Movement, also known as Asahayog Andolan, started in 1920 and lasted till 1922. Under Mahatma Gandhi's leadership, the movement strived to overthrow British rule through non-violence (ahimsa). The Assam Association, when the nation was responding to the call of Gandhi, was unsure about participating in the movement. The movement, however, gained support and reached a climax with Gandhi's visit to Assam in August 1921. In all the meetings that Gandhi addressed during his visit, a large section of people attended and responding to his appeal people joined the movement by making bonfires of British goods. The youths of Assam took part in the movement by boycotting government educational institutions.

In 1930, Gandhi gave the call for a Civil Disobedience Movement to paralyse the administration. Subsequently, on March 12, 1930, he and 78 others including Sarojini Naidu started a march from Sabarmati Ashram to the sea-coast at Dandi covering a distance of 240 miles. Upon reaching Dandi, they broke the salt law by preparing salt illegally. The movement spread rapidly all over the country.

Japan was tapping at the doors of India after overrunning Singapore and Rangoon and the Congress leaders felt that the presence of the British in India would incite Japan to invade India. Consequently, the All India Congress Committee on August 8, 1942, in Bombay initiated the famous 'Quit India' or 'Bharat Choro' resolution. During the course of the movement, Gandhi gave his famous and powerful slogan, 'do or die'.

People from all walks of life participated in the movement. In Assam, like the other parts of the country, major Congress leaders were arrested and Assam Pradesh Congress Committee, District Congress Committee and other subsidiary bodies were pronounced illegal by the British and meetings, hartals, and gatherings were outlawed.

In Assam, while the movement started with non-violent methods, with leaders being in jail as well as growing atrocities of the police pushed the movement towards rebellion. People soon stormed government buildings, damaged railway tracks and wrecked military supply lines. In Nagaon and Darrang, government buildings were repeatedly attacked and officers were attacked.

In the elections conducted after World WarII in 1946, the Indian National Congress emerged as the majority party in Assam by winning 58 seats out of 108 seats. Thus, Congress formed the government with Gopinath Bordoloi as the Prime Minister (Chief Minister) of Assam. The members of his ministry were Basanta Kr. Das, Bishnuram Medhi, Nichols Roy, Ramnath Das, Baidyanath Mukherjee and Abdul Matlib Mazumdar.

1. When did the first Anglo-Burmese war take place?

2. Who initiated the Gyan Pradayini Sabha and when?

3. How did Assam Chatra Sanmilan helped in the growth of a conscious group of Assamese students.

Answer: The first session of Assam Chatra Sanmilan was held on 25 December 1916 at Guwahati under the Presidentship of Lakshminath Bezbarua. The chief objective of the Sanmilan was to enrich the mother tongue by contributing towards its development and preservation. The Chatra Sanmilan also attempted at exchanging views amongst all the students of schools and colleges of Assam. At its inception, the Sanmilan kept politics away from its purview, yet many of its leaders supported the participation of students in national politics. Thus, though it was not a political organisation, it helped in the growth of a conscious group of Assamese students.

4. Why was the All Assam Ryot Sabha formed? When was its first session held?

Answer: To direct all the Ryot Sabhas towards a common goal or objective a central committee, the All Assam Ryot Sabha was formed.

5. Who formed the Ahom Sabha and when?

Answer: The Ahom Sabha was formed in 1893 by Padmanath Gohain Baruah. The first session of the Sabha was held at Sibsagar in 1893.

6. What were the chief objectives of the Jorhat Sarbajanik Sabha?

Answer: The chief objectives of the Jorhat Sarbajanik Sabha were:

7. Who founded the Ahom Association and when?

Answer: Assam Association was formed in the year 1903 by Manik Chandra Baruah.

8. What were the impacts of the Non-Cooperation Movement in Assam?

Answer: One of the major impacts of the movement in Assam was the fall in opium consumption. As a result of the vigorous anti-opium campaign led by the Congress workers, the consumption of the abkari opium fell from 1615 maunds in 1920-21 to 993 maunds in 1922-23. The revenue earned from the selling of opium decreased by 19 lakhs rupees. Another important constructive work was popularising the use of khadi and increasing the production of khadi.

9. Who was the only martyr to be hanged in India during the Quit India Movement?

Answer: Kushal Konwar was the only martyr to be hanged in India during the Quit India Movement.

10. Who was the first Prime Minister (Chief Minister) of Assam? What problems did he face?

Answer: Gopinath Bordoloi was the first Prime Minister (Chief Minister) of Assam. At the time of independence, Assam was not only facing the problem of the immigrants
but also the problem of economic and infrastructural backwardness. Gopinath Bordoloi and his ministry had to deal with such acute problems and made a sincere effort to bring about an inclusive development of the region.