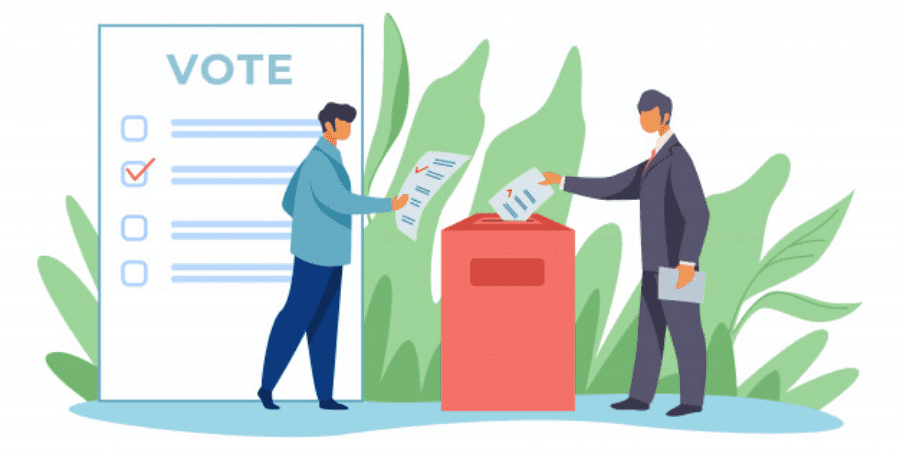 This article gives a brief summary and additional/extra questions and answers of the chapter "Political parties in India" which is the first chapter of the Political Science and Economics textbook of Class 9 under the Board of Secondary Education, Assam (SEBA).

As democratic pursuit evolved, the role of political parties came into clear focus. Under a monarchy, the king was the sole authority to govern a state, and his words were considered the law. Over time, the monarchy gradually ceased to exist in the world, giving way to the concept of democracy. In all democratic countries across the globe, there is a party system, whether it's a single party or bi-party, or multi-party.

China has a one-party system or is ruled by just one political party, called the Communist Party. A bi-party system can be found in countries such as the U.S.A. and England. In countries like India, Pakistan, Bangladesh, etc., there is a multi-party system.

Many people belonging to innumerable castes and communities living in India tend to stay loyal to their own interest and indigenous identity, which leads to the birth of many regional political parties in India.

The role of the opposition in a democracy

Democratic states cannot succeed nor do they claim to represent the interests of the people without strong opposition.

There was not any recognized opposition party until the Fourth General Election because, except for the Indian National Congress, no other party was able to win the minimum requirement of 50 seats to claim opposition status. But later on few parties were able to reach that recognition as the opposition party. In fact, it was only after 1977 that the role of the opposition was seen in a clear manner.

i. The opposition party must regularly keep watch over the interests of the people and state, and protect the sovereignty of the state.

ii. The opposition party should watch closely the activities of the government so that they do not indulge in anything counter to the national interest or negatively affecting the mass people.

iii. The government's upcoming and ongoing schemes, plans, and programmes must be examined exhaustively, and if anything is found out of order, the opposition is to bring it to the attention of the Parliament through constructive criticism to prompt rectification of the mistakes on the part of the government.

Any political party that does not get an absolute majority in the General Elections cannot form a government on its own, therefore, a few like-minded parties come together and form a government. A government of this type is known as the Alliance or Coalition government. Parties forming an alliance to form government may hold differing views. However, in order to gain control of government these parties compromise and make adjustments to their respective ideals and interests.

The demerits of the Alliance government

ii. The government of such an alliance is generally weak. It cannot take bold decisions to push ahead in any aspect, because all the interests of the various parties must be taken into account.

iii. As the Alliance government is weak and uncertain regarding its own existence, no long-term program can be adopted.

iv. Members of the Alliance for the Government consist of many ambitious political leaders whose sole aim in most cases is to gain political gain and benefit. Such selfish interests ultimately make the government anti-people.

v. There is a national interest threat when even regional considerations or communal forces must be accommodated and given preference when forming an Alliance government. Consequently, the national interest could end up getting affected.

vi. An Alliance government is generally found to be an excessively expensive affair. There are many parties involved in the alliance, so the number of ministers becomes excessively larger, resulting in a huge waste of public money.

Merits of the Alliance government

i. The Alliance government is suitable for the situations and the time. It is especially important in times of changing situations in a giant country such as India to maintain political stability.

ii. A single-party government—or one that commands an absolute majority—always carries the risk of becoming autocratic. Because of its absolute majority in the legislature, such a government often indulges in anti-people activities. In an Alliance government, the misuse of power and fear of becoming autocratic is much less because decisions are taken only after full deliberation with each constituent political party

iii. The Alliance government gets better representation of the various regions and the castes and communities than the one-party government. The regional parties are better able to solve their local problems when they participate as constituent members in the government.

iv. The Alliance government gathers various political parties under one platform to combine and adapt with other political parties, so these parties are unable to strictly adhere to their own beliefs, ideals, and principles. As such, national unity and national integration are strengthened.

1. Which was the first-ever national political party in India?

2. Which was the first regional political party in India?

Answer: The first regional political party in India is Dravida.Munnetra Kajhagam(DMK) of Tamilnadu.

3. Why there is a need for regional political parties?

Answer: The regional political parties are required to present their regional problems on the floor of the legislature strongly and to take appropriate steps for their time-bound solution.

4. When was the first alliance government formed? Who was its leader?

Answer: The first-ever Alliance 'government was formed in 1977 under the Prime Ministership of Morarji Desai.

Answer: In a bi-party system, there are two main political parties and the people can choose any party or they can become a member of any party on the basis of its ideals.

7. What are the essential characteristics of a political party?

Answer: The most essential. characteristics of a political party are:

(a) organization (b) principle, ideals and planning (c) aspiration for capturing power (d) regards for the national interest

8. Under whose leadership was the Indian National Congress formed?

Answer: The Indian National Congress was established under the leadership of a retired I.C.S. officer Allen Octavian Hume.

9. When was Muslim League came into being?

Answer: The Muslim League came into existence in the year 1906.

10. Which was Indian’s third political party? When was it formed?

Answer: India's third political party was the Hindu Mahasabha. It was formed in the year 1916.

11. Which was India’s fourth political party?

Answer: The fourth political party of India was the Swaraj party. It was established under the leadership of Chittaranjan Das and Motilal Nehru in the year 1922 and subsequently merged with the Indian National Congress.

12. Which was the first left party in India? When was it formed?

Answer: In 1924, the Communist Party of India was established. It was also the fifth political party of pre-independent India, created with the philosophy and ideals communism of Karl Marx.

14. What are the main factors for the birth of regional parties in India?

Answer: The main factors for the birth of regional political parties in the country are:

15. Mention some significant regional parties in India at present.

16. What are the different Alliance governments that ruled the centre on different occasions.

Answer: The different Alliance governments that ruled at the centre in different period and occasions are the United Progressive Alliance(UPA) and the National Democratic Alliance (NDA).