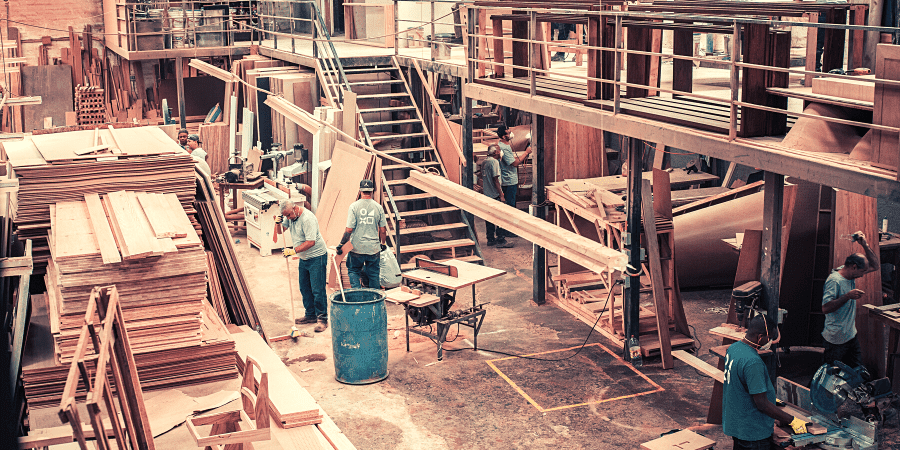 Introduction to the chapter Manufacturing Industries: Manufacturing is the process of mass-producing items with the use of machines. Manufacturing entails the transformation of raw materials into more valuable goods in big quantities. Manufacturing industry development is a metric for analysing a country's economic strength. It is also a critical tool for overcoming poverty.

The economy and industry of the country

India has achieved a high level of self-sufficiency in a wide range of basic and capital commodities since independence. However, throughout the last two decades, the manufacturing industries' proportion of GDP has remained stable at roughly 15% of GDP, out of a total of 27% for the industry, which includes 10% for quarrying, electricity, gas, and mining. When compared to some East Asian economies (25-35%), this is significantly lower.

Industries are located in certain areas

Locating an industry is a difficult task. Many factors influence the location of industries, including raw material availability, labour, capital, electricity, and market. Finding all of the elements in one place is really challenging. As a result, an industry is established or located in a location where the majority of the components are naturally present or can be obtained readily and at a fair cost.

The textile industry is the country's only self-sufficient and value-chain-complete industry. This implies it covers everything from basic materials to the highest-value-added items, such as clothes.

The Harappans were among the first people in the world to use cotton clothing. India's cotton textile industry is one of the country's oldest. The first mill in the modern era was erected in Mumbai in 1854.

After cotton, this is the second most important industry. In India, there are approximately 80 jute mills. The majority of these are found in West Bengal, along the banks of the Hugli River. West Bengal produces more than 80% of the jute items in the world. Andhra Pradesh produces roughly 80%, with the remaining 10% coming from Bihar, Uttar Pradesh, Madhya Pradesh, Odisha, Assam, and Tripura.

Sugar is India's second-largest agricultural export. However, it is the leading producer of khandsari and gur. Sugar farming is predicted to be the source of income for 34 million Indian farmers and their families.

Because all other industries rely on it for their machinery, the iron and steel industry is known as the basic industry. This business is classified as a heavy industry because the raw materials utilised are heavy and bulky, necessitating a significant investment in transportation.

Aluminium has been popular as steel, zinc, copper, and lead alternative. It's used to make planes, wire, and kitchen utensils. This metal has a lot of positive characteristics. It's light, corrosion-resistant, malleable, and a good heat conductor, and it gains strength when mixed with other metals.

Chemical fertilisers were critical to India's Green Revolution achievement and subsequent self-sufficiency in food grain production. The increased use of fertiliser has made a substantial contribution to the country's long-term food grain output.

The cement industry has outpaced itself, increasing production capacity, attracting the top cement companies in the world, and initiating mergers and acquisitions to increase growth, driven by a booming housing sector, global demand, and increased activity in infrastructure development such as state and national highways.

The automobile sector, one of India's most important businesses, has grown dramatically during the previous two decades. Liberalization brought in a new era of modern and innovative models, which boosted market demand for automobiles.

The information technology and electronics industries are based on a worldwide scale. Products are conceived in one country, manufactured in another, and then sold globally. Transistors, television sets, computers, radars, cellular telecoms pagers, telephones, and other equipment, such as that used in post and telegraph offices, are all part of the business.

Economic development and environmental protection or preservation must go hand in hand for sustainable development to occur.

1. Manufacturing is the process of

2. Which of the following developments usually follows the industrial activity?

3. Which of the following is not a factor of product

4. Which of the following industries is in the private sector?

5. Oil India Limited (OIL) belongs to which of the following types of industries?

6. Which of the following industries belong to the category of heavy industries?

1. Which of these is the oldest industry in India?

2. The first jute mill in India was established in

3. The first steel plant in India was first set up in

4. Which of the following is a secondary method

5. Which of the following is a heavy industry?